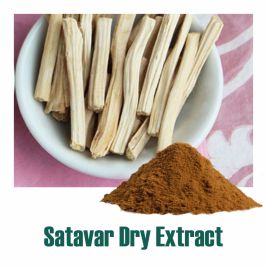 Asparagus Racemosus (Satavar, Shatavari, or Shatamull) is a species of Asparagus commonly found throughout Nepal, Sri Lanka, India and the Himalayas. Shatavari or Asparagus Racemosus is an important plant in traditional medicine in tropical and subtropical India. Its medicinal usage has been reported in the Indian and British Pharmacopoeias and in traditional systems of medicine such as Ayurveda, Unani, and Siddha.

Hence, it is also called “Queen of Herbs”! As per Ayurveda, Shatavari or Asparagus is indeed a primary uterine tonic for weak & malnourished women. It supports well being & general health of Uterus in all ages,
especially during menopause, protecting it from numerous ailments & mood swings. Asparagus benefits male reproductive system, too. Its mucous enhancing properties help to increase the reproductive fluids, supporting a healthy sperm count and genital organs in men.

As per modern study – Shatavari or Asparagus, primarily help as a reproductive tonic (both male and female), promotes soothing effect on the digestive system and as a powerful adaptogen (which helps the body to adapt to various unhealthy surroundings). As a reproductive tonic, Shatavari helps to regulate the menstrual cycle and female hormones, reduce vaginal pain during the monthly cycle. Shatavari promotes uterine strength during pregnancy, childbirth and ample lactation (flow and quantity of milk). Shatavari helps to reduce hot flashes, night sweats, irritability, hormonal disturbances and dryness during menopause.