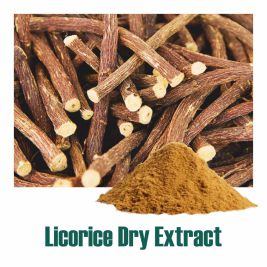 Licorice extract, or licorice, is the root of Glycyrrhiza glabra herb from which a sweet flavor can be extracted (named Glycyrrhizin). The word Licorice is derived (via the Old French licoresse) from the Greek glycyrrhiza, meaning “sweet root”. Licorice flavors are used as candies or sweeteners, particularly in some European and Middle Eastern countries. Licorice extracts have a number of medical uses, and they are also used in herbal and folk medications. Hundreds of potentially healing substances have been identified in licorice as well, including compounds called flavonoids and various plant estrogens (phytoestrogens). The herb’s key therapeutic compound, glycyrrhizin (which is 50 times sweeter than sugar) exerts numerous beneficial effects on the body, making licorice a valuable herb for treating a host of ailments. It seems to prevent the breakdown of adrenal hormones such as cortisol (the body’s primary stress-fighting adrenal hormone), making these hormones more available to the body.

It has a well-documented reputation for healing ulcers. It can lower stomach acid levels, relieve heartburn, hyper-acidity, indigestion and act as a mild laxative.It also has a beneficial action on irritation, inflammation, and spasm in the digestive tract. Through its beneficial action on the liver, it increases bile flow and lowers cholesterol levels.

Licorice also appears to enhance immunity by boosting levels of interferon, a key immune system chemical that fights off attacking viruses. It also contains powerful antioxidants as well as certain phytoestrogens that can perform some of the functions of the body’s natural estrogens; very helpful during the menopause. Study on Glycyrrhizinic acid shows to stop the growth of many bacteria and of viruses such as influenza A.

Licorice protects the Liver & promotes healing of the damaged cells. It shows anti- inflammatory action with antiviral & anti –oxidants properties that help maintain the overall health of the liver.

The phytoestrogens in Licorice have a mild estrogenic effect, which helps in easing certain symptoms of PMS (premenstrual syndrome) – such as irritability, bloating and breast tenderness. Recent studies have found that by limiting the damage from LDL (bad cholesterol), Licorice may reduce or prevent artery clogging plaque formation & contribute to healthy functioning of the heart.