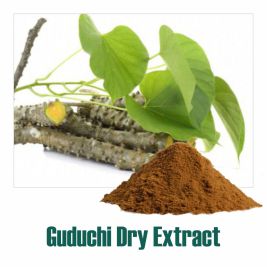 A plant with as diverse a role as Tinospora cordifolia is a versatile resource for all forms of life. There are reports that the plant extracts have active compounds in the form of alkaloids, glycosides, lactones, bitters and steroids. All these active compounds have immune modulator and physiological roles of different types, thereby demonstrating the diverse versatility of the plant.

Aqueous Tinospora extracts has been reported to influence the cytokine production, stimulation & activation of immune effector cells and prevention of oxidative Stress on cells. It also exhibits reduction in eosinophil count, stimulation of B lymphocytes, macrophages and polymorphonuclear leucocytes and hemoglobin percentage. Thus it can be used in Various ailments as adjuvant therapy.

It has also been reported to mediate its anti-diabetic potential through mitigating oxidative stress (OS), promoting insulin secretion and also by inhibiting gluconeogenesis and glycogenolysis, thereby regulating blood glucose. The root extract has been reported to decrease the levels of glycosylated haemoglobin also.

Extract of Tinospora have been shown to stimulate the growth of osteoblasts (Bone Cells), increasing the differentiation of cells into osteoblastic lineage and also increasing the mineralization of bone like matrix and to induce a significant increase in the thickness of joint cartilage, which in all helps to prevent Osteoporosis & Osteoarthritis.