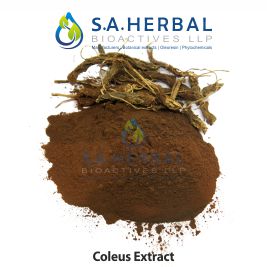 Coleus Forskohlii is a fleshy, perennial herb, which has an aroma similar to camphor; its spiked flowers are typical of the mint family. Coleus is a hardy plant, growing on the dry slopes of the lower Himalayas and the plains in Uttar Pradesh, Northern India. However, coleus has long been cultivated in India, Thailand and also in other parts of South East Asia.

Coleus has a 3000-year history in Ayurvedic medicine (known as Gandira) and is mentioned in ancient Sanskrit texts as a tonic for a healthy heart and lungs. Nowadays, coleus is not just a herb for cardiovascular ailments but is increasingly used to assist weight loss by breaking down adipose tissue and preventing production of further fatty tissue. In addition, coleus supports stimulation of metabolism by increasing thyroid hormones and the secretion of insulin. Coleus promotes blood circulation with dilatation in heart muscles which supports blood pressure lowering response in short term.

Scientific studies of Coleus have shown presence of its principal active compound, a diterpenoid called forskohlin. Research study also confirms that this is the only plant-derived compound known to directly stimulate the enzymes, promoting cellular cyclic mono-phosphates which boost our metabolism, thus helping in weight management. Coleus also supports low allergic reactions by virtue of presence of Forskohlin which works as a stabilizer for cells that release histamine, helping in breathlessness.