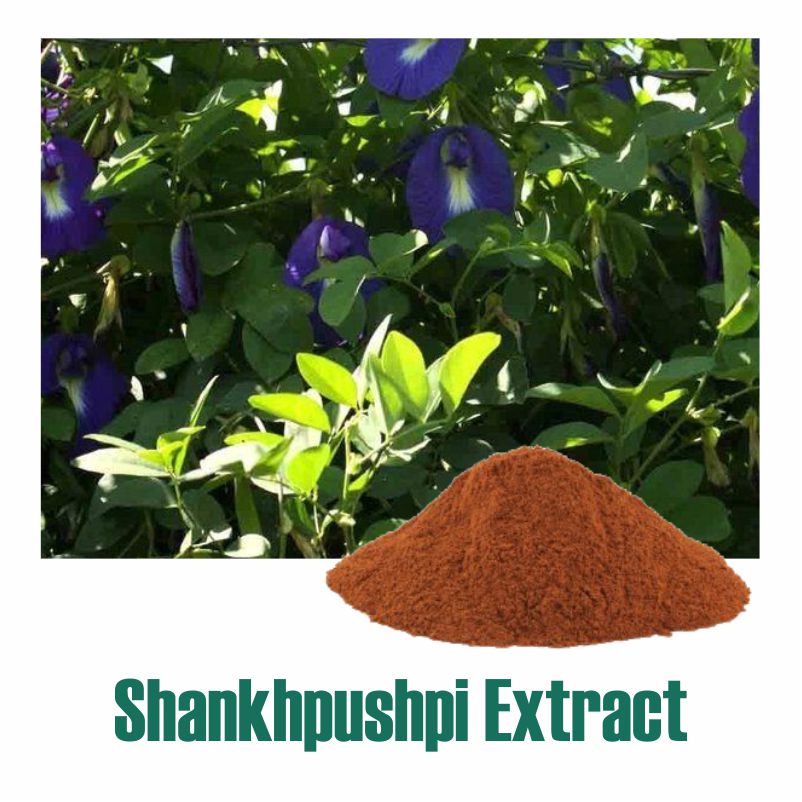 Sankhapuspi extract Convolvulus pluricaulis/ Sankhapuspi – is a perennial herb that seems like morning glory. As per ancient wisdom -It is believed to be the only herb that is capable of enhancing all the aspects related to brain power, such as learning, memory and the ability to recall. However, its popularity stems from its ability to treat insomnia effectively. Clinical studies have exhibited demonstrable beneficial effects in the patients of anxiety neurosis. The herb induces a feeling of calm and peace, good sleep and a relief in anxiety, stresses, and mental fatigue, producing a significant reduction in the level of anxiety, neuroticism arising due to various levels of stresses. Sankhapuspi appears to produce its action by modulation of neuro-chemistry of the brain. Further, Sankhapuspi is non-toxic and its use does not produce any side effects.

As per Ayurveda Sankhapuspi helps to maintain equilibrium of Tridosha’s(Vata, Pitta, kapha), is Astringent and hot in potency. Sankhapuspi is described as Medhya which means Brain Tonic, helps with other medicines in many Mental Problems. It helps in regular metabolism of food, increase appetite and remove toxins from the body. It is believed that Sankhapuspi has evil spirit/ negative vibes removing properties which prevents formation of negative thoughts in human body and free brain from stress & strain. Sankhapuspi 2 tsp is given with Black sesame ½ tsp extract to pacify the problem of bedwetting in children. In Sunstroke whenever there is consciousness problem, Sankhapuspi extract is given internally with milk & honey to cool the body and recover fast. Take 3 to 6 grams of Convolvulus pluricaulis extract with milk early in the morning to enhance the memory power & remove Fatigue, if you are studying for long hours. Long term use of Sankhapuspi helps to retard progression of various Nervous System ailments like Parkinson, Anxiety Neurosis, Alzheimer’s disease etc. Sankhapuspi also helps in Spermatogenesis & as genital tonic.

Various Scientific Studies of Sankhapuspi have shown various chemical compositions, such as glucose, sucrose, glycosides, alkaloids and various acids etc. Thus Sankhapuspi is the most wonderful gift of nature to the mankind and is considered to be the only herb which has the ability to enhance all the aspects connected to brain power, for example memory, learning, and the ability to recall!